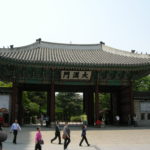 Deoksugung Palace is one of the five palaces from the Jeseon Dynasty which lasted over 500 years. Deoksugung was originally built as a residence for Prince Wolsan, the elder brother of King Seongjong (1469-1494). After all other palace buildings were destroyed by fire during the Japanese invasion of 1592, King Seonjo (1567-1608) established a temporary [...]