King Gyeongjong ascended the throne in 1720 at the age of 33. He was so weak that he did not produce an heir. After only two months on the throne he appointed his half brother, Prince Yeoning (later King Yeongjo) as heir to handle state affairs. It is said that his mother, Lady Jang is to blame for his diseases. When Lady Jang was sentenced to death by poison, she begged to see her son the crown prince (Later King Gyeongjong). When she met him she dashed towards him and inflicted an injury to his lower abdomen.

Due to King Gyeongjong’s fragile health, he had no energy or time to do anything significant in the four years of his reign. The tomb at Uireung is quite unique as the arrangement of the tombs are different than others. Usually the tomb of the King and Queen are placed side by side however at Uireung they were arranged front to back. The area around Uireung is quite large and would be a great place to have a picnic.

How to get to Uireung Royal Tomb: 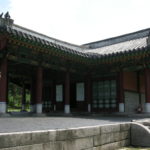